This episode is 100% complete with a major audio upgrade, Dominic is making his only appearance on CLL, promoting the TV series ‘John Doe’ while Adam is broadcasting from Las Vegas after recording the Howard Stern show earlier in the day. Dominic proves to be a fun and involved guest and despite Adam’s distance it almost feels like he’s in the room. Dominic tells them about having his role mostly cut out of ‘Mission Impossible II’ and how his TV series is “on the bubble” and may not come back. They speak to legendary caller ‘Kenneth’ throughout the show. 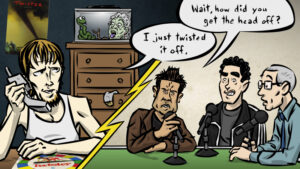 The Love Between The Two Hosts – CLL on Youtube, with Video for select episodes.

Paid Link – As an Amazon Associate I earn from qualifying purchases.

Check out His Website and Soundcloud to hear more of his awesome work and perhaps commission him for your next project.